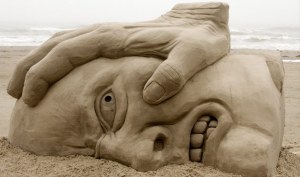 The dizzying effects of Fat Tuesday are over and the sobering effect of Lent has set in. All the things I said I would give up for God seem less like noble sacrifices and more like some idiotic thing I said in anticipation of over-indulging on Fat Tuesday. Kind of like saying, “I’m not trying to be insulting” just before you insult someone.

The thing I wrestle with over and over  – and not necessarily only on Lent – but every time I realize I need to get my act together (which is often) – is that I have to get “real” with myself before I can actually start making changes. The thing is: knowing the truth and accepting the truth are two very different things. It seems to me that agony lies between the two.

So how do you discover the truth or what is real?
I begin by wrestling with questions or avoiding questions and, in the process,  spend a lot of energy. Questions like: How did this happen? Why does it continue? Is it really bad for me? Who’s fault is it? Should I be dealing with this at all?   I wish I could just skip the questions and get to ‘real’ right off the bat, but it seems to be a process of self-discovery for me albeit agonizing.

Giving up caffeine for instance. I said I was going to give up caffeine (again). Something inside me keeps saying, one more soda isn’t going to hurt anything. Nobody ever died from one soda. But my problem isn’t one soda, it’s the gallons of soda a week I drink. A minor indulgence is not the problem. And the fact is, it is what I do consistently that matters, not the things I do sometimes. I do not need caffeine. I need to give it up. Not because I’m being noble but because it is imperative to my health. So really, I’m not giving it up for God but for myself.

Cursing is another issue. I said I was going to give up cursing. I have a seriously bad habit of cursing. My mother did her best and in her presence I never curse. So I know it can be done. I like to think I picked up the habit many years ago working around what some would consider “rough characters”. In reality I started cursing to vent frustration rather than dealing with my hot temper and impatience. I just felt it was ‘ok’ to let those words fly in the presence of what some would consider “rough characters”. But that’s another lie. Those people I worked with were some of the best people I’ve ever met. The stereotype in my own mind and the weakness of my own character made it,  in my mind at least,  ‘ok’ to say those words in their presence and they just were too nice to call me out on it.

Funny how I do that. I like to blame other people and my circumstances when in actuality I am just not being ‘real’ with myself or my God.

God knows I’m just fooling myself and thereby being foolish, but free-will and all that jazz gets me into trouble. When I’m standing there with a soda in my hand and my husband walks in and says, “What are you drinking?”, I sometimes I feel like Cain after he knocked Able in the head for being “better” than he was at just about everything. God says to Cain, “Where is your brother”? And Cain says, “Am I my brother’s keeper?!” <insert eyeroll> When he knows full well that Able is sleeping with the fishes.

I know deep down that when I hide from God, I am not postponing the pain of conviction. I am prolonging the pain of my own actions. I guess too often I forget to begin my process of self-discovery with prayer. I sometimes forget that the thing about forgiveness is that I don’t have to be perfect to get it. I just have to acknowledge my actions and ask for it. That’s all. But in order to do that I have to get ‘real’ first. So how do I shorten the agony of that process? I don’t know that I can except to accept God’s help and stop avoiding the truth even when it hurts. I am finally learning that part of being a Christian is trusting God and allowing myself to see me as God does. Sometimes that’s painful for me, but that’s the ultimate in ‘getting real’. I guess that’s what “The truth shall set you free” means. Yes, it will set me free but until I accept it and confess it, it will hold me down.

So, after asking God for help, and going through my discovery process,  this is me finally getting real:

Just the power of saying those things makes it much easier to establish the new manifesto of my life:

I am better than that. I am a child of God and if I ask for his help I shall receive it in abundance.

What do you need to get ‘real’ about? What’s your self-discovery process?

For more on the meaning of Lent here’s a great blog post by  Joel Miller  http://joeljmiller.com/whats-the-point-of-lent/

How Do You Undo a Lie?

My son and I were watching a preview on TV about cyber-bullying. The preview started a conversation about cyber-bullying, name calling, and otherwise attacking someone’s character. He asked me about the saying, “Sticks and stones may break my bones, but words will never hurt me.”

I have heard many sermons on gossip, and of course we all know that lying, ‘Bearing false witness’, is a sin because it’s a commandment. I told my child these things, but nothing illustrates a point like a good story.

As Grace would have it, on the very day my son was to ask me this question, I heard a story about a Rabbi.

There was a wise Rabbi who did his best to teach his students, but he was a tough teacher. He was particularly hard on his most promising student. This student became frustrated and angry with the Rabbi. After class, he told some fellow classmates a lie about the Rabbi. He and his fellow students thought it was funny.  But, the lie began to spread. Each student took the lie home to their friends and to their families who also began to spread the lie as the truth.

The next day the student heard a much bigger and more serious version of the lie from someone else, and he felt remorse. He realized he had wronged the Rabbi and needed to ask for his forgiveness. He gathered his courage and went to see the Rabbi.

He hung his head and wrung his hands as he sat before the Rabbi. “Rabbi, I have sinned against you. I told a lie about you, and I seek your forgiveness.”

The Rabbi was silent and thought for a while, “Son, you are one of my brightest students, and I am glad that you have asked for my forgiveness.”

“Do I have it?” asked the Student.

“You will have it, but first you must do something for me,” said the Rabbi.

“What? Anything! Just name it and I will do it because I really need your forgiveness in this matter.”

The Rabbi said, “Go and buy me two feather pillows and bring them to me.”

The Student did as the Rabbi asked, and returned with the pillows. “Rabbi, I have the pillows. Now do I have your forgiveness?”

“Not so fast,” the Rabbi said, “Take my knife and go outside on the street and cut a slit in each pillow. Once you’ve done that, empty every feather out of each case and return to me with the empty cases.”

The Student puzzled, but did as the Rabbi asked. He cut the pillow cases, and shook out the pillows. He emptied every feather from the cases and watched as the feathers scattered in the wind.

The Student took the empty pillow cases to the Rabbi and said, “Rabbi, I’ve done as you asked, now do I have your forgiveness?”

The Rabbi said, “You shall have my forgiveness, but I ask you to do one more thing. Go take these empty pillow cases  and fill them with every feather that was in them. I ask you to do this as an act to demonstrate recovering all the harm you have done to my good name.”

When I finished the story, my son’s eyes grew wide and then he said, “Wow.”

I can think of no better way to explain the harm of a lie, gossip, or cyber-bullying than this parable. Words DO hurt, and they are impossible to contain once released.

May your words be compassionate and encouraging today.