← Closing the door
God, the flag, and politics →

Is depression an illness or a lack of faith?

A few years ago, a friend of mine drove home from work and stopped to call all his family members to tell them he was ‘going home’. The tone in his voice alarmed one family member who called the other family members and asked them to meet at his home before he arrived. Everyone was standing in the driveway waiting for him. When he arrived, he didn’t say a word. He quickly passed by them, walked into his home with family hot on his trail, picked up a gun, and shot himself.

There were none of the warning signs we are taught to look for. He didn’t give away his belongings. He didn’t lose interest in school, work or family. He didn’t even seem depressed. He was going through a difficult time, but he seemed to be dealing with it.

In the wake of his death, many people didn’t know what to say. Most offered condolences and left it at that. A few people speculated out loud about his ‘eternal fate’. They implied that he was in hell. One person said so definitively, “How terrible that the family will never see him again unless it’s in hell.”

This troubled me for many reasons. First, it was inappropriate to heap more grief on an already grieving family. Second, this attitude defines suicide as a weakness of character and/or a weakness of faith.

I was troubled, so I sought the advice of someone I respected. She’s a teacher, a friend, and a life-long Christian. When I told her what had happened, she said, “Good grief. I can’t believe that someone would think that let alone say it. Even God’s smallest creatures fight to survive. A tiny little mouse will fight to survive if threatened. It’s a defense mechanism that’s built into all God’s creatures. If that mechanism is broken, then it needs mending just like a broken leg. The problem is, you can’t always see it because it’s a mental break. God knows before we do what is going on with us. Either you believe that, or you don’t believe in the word of God as a whole. So, if God knows, then he also must understand. I can’t believe in a God that would punish someone who is mentally ill anymore than I can believe in a God who would punish someone who drives recklessly and gets killed in a car accident.”

Psalm 139:1-3 – O Lord, you have searched me and you know me. You know when I sit and when I rise; you perceive my thoughts from afar, you discern my going out and my lying down, you are familiar with all my ways. (NIV)

No one, including my trusted adviser, is advocating suicide. Life is harsh. No matter how tough you think you are, you never know what might break you.

God gives us strength. I do not doubt that.

When someone is depressed or suicidal, I can’t help but believe something else is at work. Many people say that during bouts of depression everything hurts. Even compliments are turned around in the mind as an arrow to the heart. I can’t imagine such agony. For many, medication and therapy works. That leads me to believe that depression is an illness, and not a lack of faith. I do know that no matter how the person got there, they need help to get out of it, and it is not for me to judge them. Thankfully, there are religious and non-secular counselors there to help those who suffer from depression. There should be no stigma attached with seeking help. Seeking help takes strength and courage….and a good deal of faith.

I  know protecting our hearts and minds from ‘negative’ or ‘harmful’ thoughts is part of practicing our faith. Meditating on God’s word, praying, and listening for God’s whispers can help keep our internal compasses on course and help us eliminate negative thoughts. As the old saying goes, “You can’t stop a bird from flying over your head, but you can keep it from building a nest on your head.” So, maybe religion alone can’t cure depression, but perhaps it can help prevent it?

I don’t know all the answers. I’m not a doctor or theologian. I just know there are people suffering, and once depression takes hold, it is difficult to make it go away without help.

Here’s to fostering positive thinking with God’s help. And, if you know of someone who is suffering from depression, please encourage them to seek help immediately. 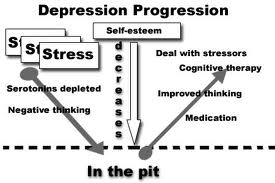 ← Closing the door
God, the flag, and politics →